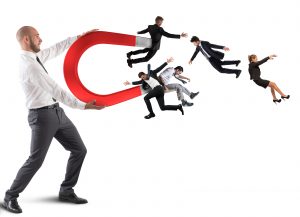 When two of the biggest names in business line up to tell us that Talent Attraction is arguably your single biggest success factor for the coming years, it’s time to pay attention. That’s exactly what’s happened in the last months, as both McKinsey and LinkedIn have stressed that Talent Attraction will be a key business differentiator. The repercussions for the strategic importance of HR to a business – and the significance of their recruitment capabilities and recruitment supplier choices – cannot be overstated.

Firstly let’s take a look at the contribution of Dominic Barton to the debate. Barton is the global managing partner of McKinsey & Company and has recently co-authored Talent Wins: The New Playbook for Putting People First. A central tenet of the book is that for a company to thrive, it’s the ability to identify, hire and nurture talent that will increasingly be a fundamental differentiator of success.

There’s a great synopsis of some of the key messages from this book over on the Quartz at Work blog. One key point is that we’re living in a time of acute talent scarcity. It’s argued that there’s an abundance of capital looking for a home, looking for business opportunities in which to be invested, but that the key constraint is now scarcity of talent.

All of which of course points to the growing importance of both the HR function and of the recruitment industry that makes the hiring of the best talent possible. Barton believes it’s time for HR to be viewed in a different light by CEOs and business leaders, to be seen as a key strategic element of the business, where to date it has often been more of an administrative function. That’s a really encouraging message for anyone with a career in HR or a stake in the recruitment industry, as it is for all of the recruitment business franchise owners we have in our FPC family.

Whilst this will be music to the ears of many within the worlds of HR and Recruitment, the business imperative is thrown into even sharper relief by the recent publication of Talent shortage data by LinkedIn. Reporting on a Korn Ferry study, LinkedIn looked at the sectors of the economy that stand to lose most from impending talent shortages, the economic cost that will be associated with these shortages and geographically where the impact of these talent shortages will be most acutely felt.

The findings make for sobering reading. Knowledge-intensive industries will be some of the hardest hit, as will those countries with the lowest unemployment rates, where the necessity of retraining is least acute. Let’s look at some of the most significant shortfalls identified…

First up, Financial and Business Services will face a shortage of 10.7 million workers by 2030, leading to lost economic output of $1.3 trillion. Of the 20 countries studied, only India stands to have a surplus of talent in these industries by 2030. By contrast, the US economy is the most severely impacted, with $436 billion of unrealized economic output – equivalent to 1.5% of the whole US economy.

Next up, Manufacturing will face a shortfall of 7.9 million people by 2030, costing the global economy $607 billion in lost output. China is the biggest loser in this industry, though the data presented on LinkedIn shows that the impact is far reaching across economies.

Meanwhile, TMT (Technology Media and Telecommunications) will face a shortage of 4.3 million workers by 2030 – leading to lost economic output of $450 billion. Hong Kong and the US are the countries most impacted, with India again being the only country not harmed by these expected talent shortages.

Putting the sector assessment to one side, almost universally countries will experience a serious shortage of highly skilled workers (those who’ve completed post-secondary education). Most will also have an excess of mid to low skilled workers (those with upper secondary education or less). There is therefore likely to be a battle on two fronts. Firstly a battle to attract and retain highly skilled candidates as described by McKinsey’s Barton. Alongside which, there will be the challenge of training less-skilled workers at scale to plug the many skills gaps that we can see emerging over the coming decade. No wonder HR and Recruitment are being perceived in a different light.

FPC franchise owners run successful recruitment businesses that help companies to address some of the talent challenges highlighted here. If you’d like to learn more about setting up a recruitment business, why not tune in for one of our next webinars?