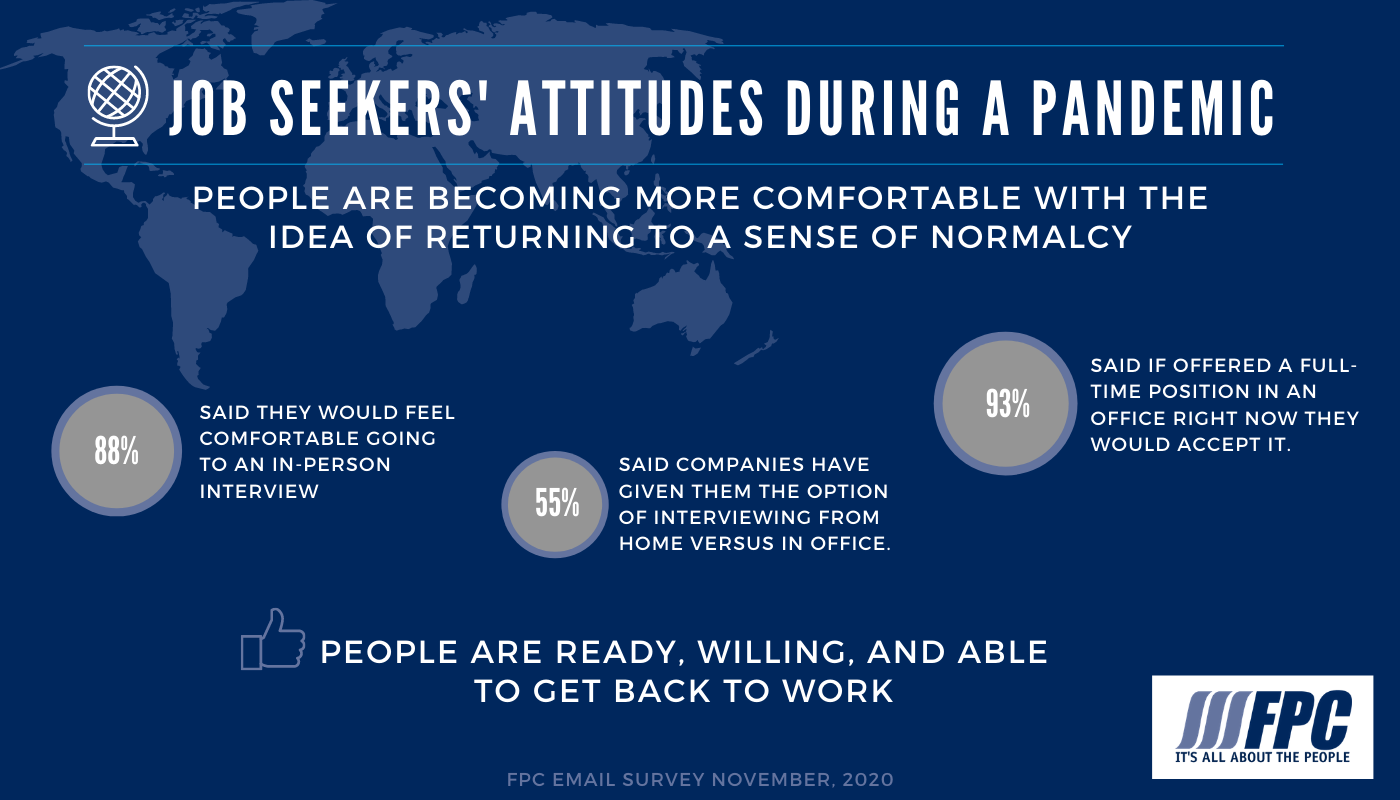 Before the pandemic began, the employment market was robust. In January 2020, growth was in the forecast, as 225,000 new jobs were added to the payrolls nationally. Average private-sector employee earnings rose in January by .2%, and increased by 3.1% over the prior year. Anyone looking for a new job in this climate likely felt optimistic about their chances of success.

But as news of the pandemic spread and America entered into a lockdown, attitudes about the job market had changed considerably. Initially, many companies paused operations and others transitioned to a remote work model. Those who were considering a job search had put their plans on hold. In an instant, the job market had been transformed from growth mode to no-go.

As the pandemic persisted, perspectives on job searching had begun to soften. By the summer, companies in certain industries were starting to expand and job seekers were, once again, preparing their resumes and contacting their recruiters. The interviewing process was modified to account for safety, as many employers transitioned to virtual meetings. Soon, there was movement again and people were on the hunt for new opportunities. As it turns out, nothing can keep the job market down for too long, and that includes a pandemic. Both employers and employees were beginning to settle into a new paradigm.

That doesn’t mean things returned to normal. Perceptions changed as employers and job seekers weighed the risks of in-person interviews and on-site operations. At FPC National, we wanted to attain a deeper understanding of job seekers’ attitudes, so we conducted a national survey of job seekers. The results will help employers understand the mindsets of candidates during this pandemic.

We administered a survey via email to 5800 people in November, and we found that people were becoming more comfortable with the idea of returning to a sense of normalcy, not only during the interviewing process, but getting back to work as well.

What Does It Mean?

Clearly, people are ready, willing, and able to get back to work, and working in an office would not be a deterrent for most.  While many companies are willing to accommodate and expand remote working for safety reasons, most job seekers would still accept a job, even if it meant working in-person.

The key takeaway from this survey for employers is that we are entering a time of unprecedented opportunity in the job market. With so much turbulence in the workforce in 2020, top talent is available and eager to pursue openings with forward-thinking companies. Employers that take action now can bolster their workforce with high performers and gain a competitive advantage as we begin to emerge from the pandemic in the coming months.